PlanetsX 3.1 was released in February 2014.
The following three items are the Release Highlights.

New features have been added

Prediction of bonding wire deformation in the resin sealing step of an IC chip is now possible. Viscous resistance, which is proportional to the size of the object in fluid, flow rate, and viscosity of resin are now able to be calculated. It is possible to load that resistance on the object in the Structural Analysis.
You can get the general deformation prediction of an elongated object flow path structure*1 including the reliability evaluation of electronics packaging. 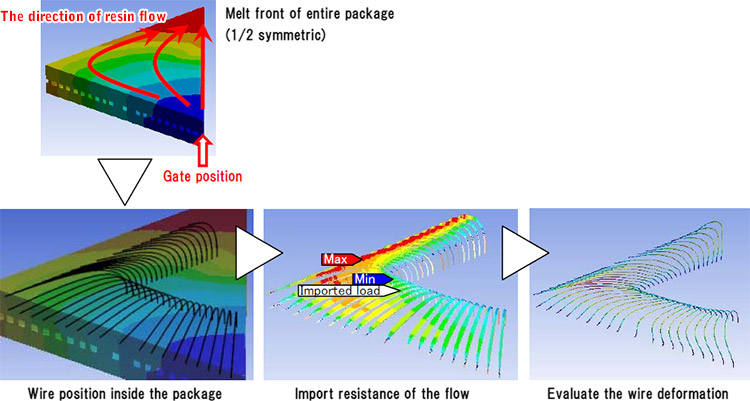 Direct coupled analysis for the temperature between structure region and resin region is now possible. As a result, it is possible to evaluate interactively how the insert material is heated by the resin over time along with the filling process. It is possible to obtain more realistic solutions by taking into account a result of the influence of the heat capacity of the mold such as how the resin is cooled/warmed by the mold. 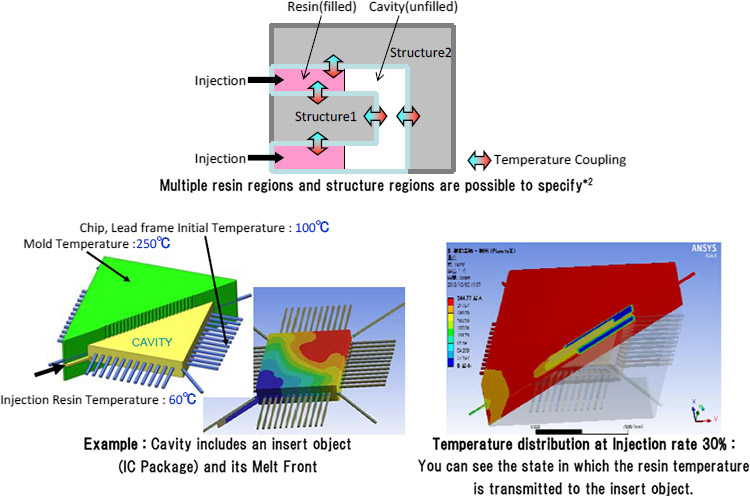 Individual boundary condition of each mold

It is possible to specify the different temperatures and the interfacial heat transfer coefficient in each mold.
It is easy to specify, for example, when a cavity side and a core side temperature are different, or a temperature is controlled by time in actual molding cases.

The solver performance has been improved

Parallelization processing was effective only in some optional features*3 in the previous version, now it is effective in all optional features and basic functions of PlanetsX. As a result, it is possible to reduce the calculation time by utilizing fully the ability of the user's computer.
Special license for parallel computation is not required*4, and there is no limit to the number of cores*5. 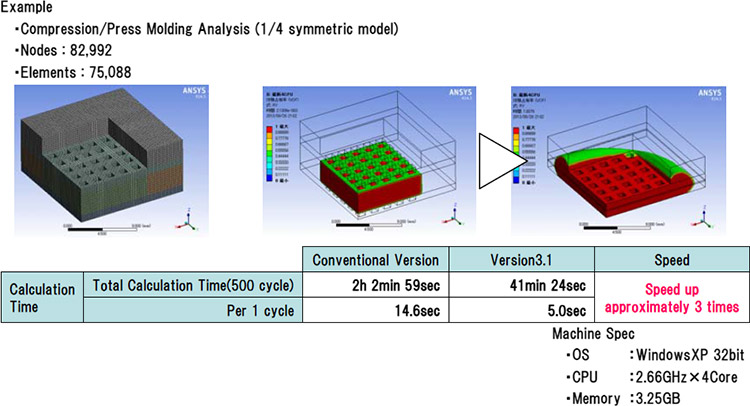 Calculation speed has improved at holding pressure and cooling phase

Reducing the number of calculation cycles, without sacrificing accuracy, have been achieved by carrying out a review of time steps of holding pressure and cooling phase.

It is possible to specify time steps arbitrarily at any time in an analysis. 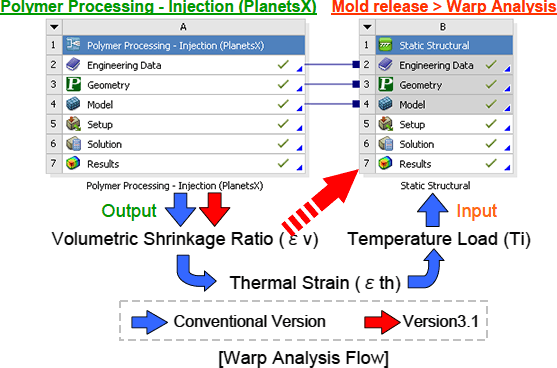 Since the thermal load label used for the transfer of volumetric shrinkage ratio in Structural Analysis has become free by the improvement described above, now can give the thermal load independently from the temperature distribution obtained by Polymer Processing - Injection (PlanetsX) Analysis.
In addition, the "No Setting" feature is added for the resin database in the Warp Analysis settings, now users can perform Warp Analysis using the properties from the Engineering Data.

Enhancements of the above two have been made for Warp Analysis using the results of the Fiber Orientation Analysis.

If the linear expansion coefficient of the resin database had a temperature dependence, the effect is now taken into account when performing Warp analysis*7.

It is possible to enter a value for the initial cure rate as a calculation start point that was fixed at zero in the previous version. Versatility has increased since the analysis can be set at various levels between uncured and cured state for the initial setting resin by utilizing this feature.

Specifying a curing rate-dependence of specific heat and thermal conductivity

The fields for determining thermal conductivity and specific heat at "uncured-state" and "completely cured state" have been newly added respectively in the resin database and curing rate dependence is now taken into account during the calculation. Because thermophysical property of the resin varies greatly in the vicinity of the gel point, analysis considering the curing rate dependence of thermophysical property is possible to get closer to reality. In this case, the specific heat and the thermal conductivity of uncured and completely cured state are required to measure independently as input data respectively. By using these linear interpolation equations in the solver, it is now possible to predict thermal conductivity and specific heat considering the curing rate dependency at any temperature.

Only one division Spencer-Gilmore expression was supported up to now. PlanetsX version3.1 supports Spencer-Gilmore equations of up to division 2, Tait equation, and Second-order approximation formula as the same specification to the thermoplastic resin. As a result, flexibility to the measurement data fitting has been enhanced. However, the PVT data of uncured state and completely cured state are required to measure independently as input data respectively as before. By using these linear interpolation equations in the solver, it is now possible to predict the PVT considering the curing rate dependency.

*1 The object has small pressure gradient in the flow direction and small projection area to the flow.
*2 Must be kept in separate groups structure parts and resin parts respectively using multi-body feature.
*3 Fiber Orientation Analysis.
*4 Additional parallel computation license for the Ansys is required for Warp Analysis and Mold Cooling Analysis because these use the Ansys solver.
*5 Effect of parallelization and the number of cores (scalability) are not necessarily proportional.
*6 Uses the Ansys solver customized dedicatedly.
*7 By this, Warp Analysis under the same conditions may have different results. The result of version3.1 can interpreted as a value more realistic.