PlanetsX 2.0 was released in February 2012.
The main upgrades are as follows:

PlanetsX 2.0 now supports the latest version of Ansys 14.0, which was released in February 2012 in Japan. 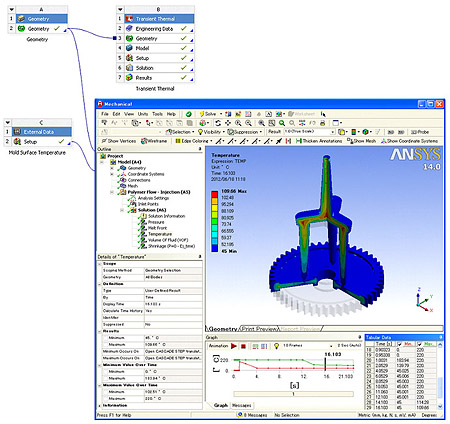 This fitting tool determines the parameters of both Macosko and Kamal models by finding the most suitable solution in the model fitting, where the modified Simplex method is used. As an input it also requires two sets of experimental data based on thermal curing reaction, i.e. the dependence of heat flow for temperature measured by a DSC (Differential Scanning Calorimetry) instrument and the dependence of viscosity for time (i.e. the growing viscosity curve) measured by a rheometer.
The parameters obtained here can be used directly as a material data for the thermosetting analysis of PlanetsX.

The following is an example from a tutorial of combined thermosetting and injection compression analysis.