CMAS 4.1 has been released in July 2013.
In this version, new element formulation for solving stable super-elastic large deformation problems has been added. 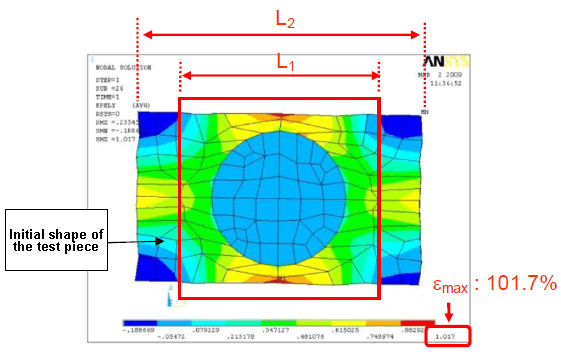 In general, composite materials including fiber-based are made up of microstructures that are mixed materials of widely different rigidity. When performing a numerical material test on those formations, and observing them in the micro-scale, it is possible to be localized from several tens of percent (10%, 20%, 30%...) to several hundreds of percent (100%, 200%, 300%...) of large strain near the material interface even when apparent strain is as small as a few percent.

Thus, the element is collapsed, and analysis was not able to be performed reliably. In this version, we focus on the advanced element formulation *1, which was developed by Reese et al. at Hannover University in Germany, and it has been implemented using a user subroutine of Ansys. Accordingly, our program has acquired more stable convergence than ever before on the large deformation problems of super-elastic.