Convergence problem of the numerical material test in composite material

Figure 1 shows modeling of composite material reinforced in one direction by fibers which are oriented perpendicular to the plane. There is a difference in rigidity of about three orders of magnitude between the matrix and fiber. 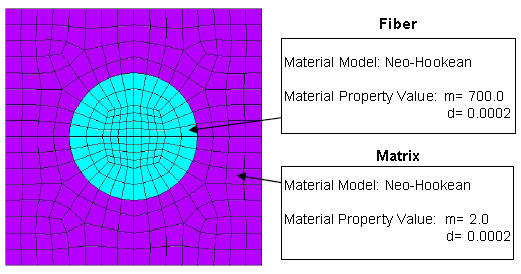 Figure 2 shows the elastic strain distribution of the tensile direction component at the time of performing the numerical material test in a direction perpendicular to the fiber in this model. We conducted a test of up to 30% macro strain, but when observing the strain distribution of the micro-scale, it could be confirmed that the tensile strain of 100% or more at vicinity of the fiber and approximately 10 percent of compressive strain had occurred in an area away from the fiber. Gradients of large strain localized in the model when performing the numerical material test on a model that had a large difference in rigidity, even a simple shape. Thus, there were cases that analyses could not be conducted frequently because of an element collapse as described above. 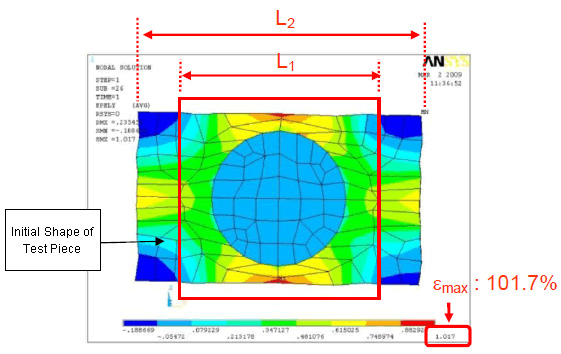 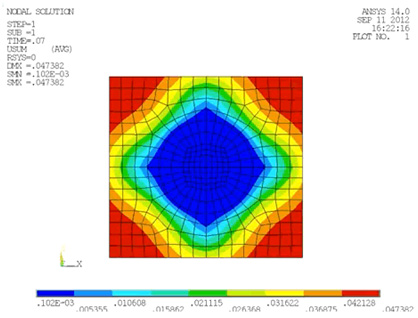 A uniaxial tensile test was performed on the model in Figure 1 using the advanced element formulation※1 by Reese et al., Hannover University, which is newly added in CMAS4.1. Figure 4 shows an animation of the comparison of the results, and the results of low-order solid elements of the current version of Ansys. Abnormal end of analysis by element decay in macro strain of about 30% could not be avoided with the element type of the current version. However, it is possible to carry out a stable analysis, even when applying macro strain of 100% or more in the new type of element.

We conducted a similar comparative verification using a ± 90 degree orientated model as shown in Figure 5. The material properties of fibers and matrix have adopted values similar to those of Figure 1. 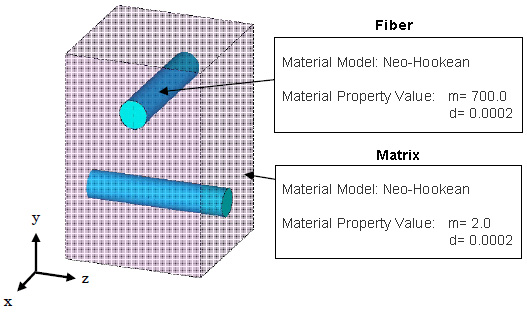